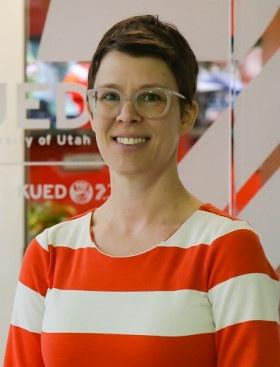 Ashley’s passion for informed and interesting storytelling fuels her drive as a media producer. She sees the process of creating media as a powerful tool in gaining wisdom of individuals, communities, and topics. Ashley grew up in the deserts of Southeastern Utah, raised by parents who spent free time white water rafting, traveling, and raising her to be conscientious. She started at PBS Utah in 2006 as a Marketing and Community Engagement Intern, then served as the Station Archivist for 3 years, during which time she was selected to take part in the American Archive for Public Broadcasting, a nationwide initiative to get public media archives into the Library of Congress.

She joined the Digital Media team as a producer in 2015. Ashley has produced digital series Let’s Talk: How to Talk to Kids About Race, and Verve: Living the Creative Life, and the podcast More Than Half, which looks at some of the most pressing issues facing women in Utah. Ashley has assisted in producing and creating content for Modern Gardener and Contact in the Community. She graduated from the University of Utah in Film Studies and attributes much of her passion for storytelling through a lens to that program. She spends all her free time exploring, adventuring, and learning with her adorable toddler Samuel and their dog Pig.

Giving Tuesday 2021
Consider making a donation to PBS Utah this Giving Tuesday. As a public media non-profit, we're committed to quality storytelling. Our programming and outreach initiatives wouldn't be possible without viewers like you. Thank you.
Give Today